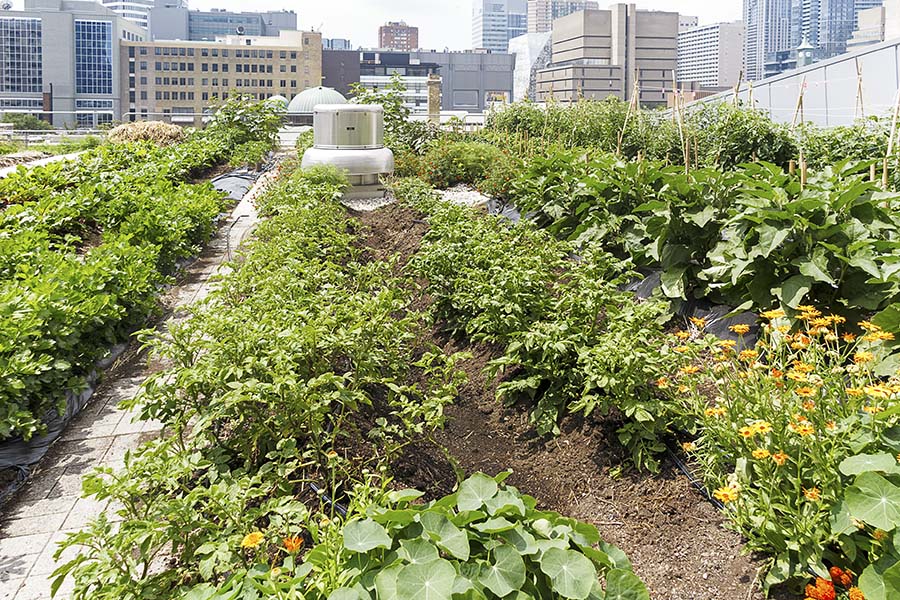 More than half of the world’s population lives in urban areas today. The number is expected to rise to 66%, more than 6 billion people, by the year 2050. According to the U.S. Census Bureau, a higher percentage, about 80%, of Americans live in large cities.

The global COVID-19 pandemic revealed unexpected and complex risks to humanity. Since people living in large metropolitan cities mostly are dependent on the external energy, water, material and food supply, they are particularly vulnerable to unanticipated risks.

Lockdowns, business shutdowns, border closures and mobility restrictions caused food losses, price volatility and increased costs. This combination challenged the supply chain dynamics during the pandemic. It quickly became apparent food security was not only an economic problem for countries with limited resources, but also had vital implications for the developed societies.

I am sure all of us heard about and saw empty grocery shelves and experienced panic during the pandemic, even in the U.S., the most prosperous country in the world. Many countries took measures to ensure their own national food security by blocking or restricting export of some staple commodities. There was news Russia, the world’s biggest wheat exporter, limited grain exports. Other countries set limits on flour, sugar, sunflower oil and even potato exports. The European Union eased import rules and standards for fresh vegetables and fruits in an effort to maintain the supply chain continuity.

Risks exposed by the global pandemic, as well as rising temperatures, extreme weather events, drought, wildfires and flooding, mostly due to the climate change, are disrupting agricultural productivity. All these experiences have prompted some of the local governments, city authorities and federal government agencies to reevaluate the food security measures currently in place. The idea urban agriculture can be a viable option to attain regional food security and self-sufficiency has been gaining significance.

The urban agriculture concept, which is broadly defined as “all forms of agricultural production of food and non-food products within or around cities,” is nothing new. Urban agriculture repurposes spaces within cities, such as vacant lots and rooftops and parks, to grow crops.

More and more consumers are turning to locally produced foods to support local small businesses and environmental sustainability and enhance their health and nutritional habits. Although urban farming has grown about 30% in the U.S. during the last three decades, it still is disputed if it realistically can ensure food self-sufficiency for large cities.

Unfortunately, local food production and supply face many challenges to meet all consumer expectations and needs. It appears many countries do not have sufficient urban space to meet a nutritional recommendation of 300 grams per person per day of fresh vegetables.

Indeed, a recent study conducted around Chicago indicated no combination of locally raised crops and livestock could satisfy all nutritional needs of the population. The latter study examined a radii of up to 400 miles around Chicago, which is the maximum distance the U.S. government deems “local.”

However, there are other reports suggesting urban agriculture can help some cities achieve self-sufficiency for certain groups of food. For example, researchers estimate Cleveland, a city with a population of 400,000, has the potential to meet the residents’ demands of 100% of fresh vegetables, 50% of poultry and egg, and 100% of honey. More than 300,000 urban farms and gardens in Cuba produce over 50% of the country's fresh produce, 39,000 tons of meat and 216 million eggs.

Food insecurity is not all about production, though. Some argue, “We grow enough food with enough calories for everyone currently living.” However, even in the U.S., millions of disadvantaged people live in “food deserts,” where residents have limited access to a variety of healthy and affordable food.

A U.S. Department of Agriculture survey found large proportions of households living in these regions of the country have low income, inadequate access to transportation and a limited number of food retailers providing fresh produce and healthy groceries for affordable prices. In the U.S., there are 23.5 million low-income people living in areas at least 1 mile away from a large grocery store or supermarket. Large cities, such as Washington D.C.; Richmond, Virginia; and Dallas, Texas, are supporting and enabling urban agricultural initiatives and providing opportunities to remedy the food access problem. Some of the programs’ goals are to educate people about healthy eating habits, create jobs, launch businesses and limit incarceration rates.

There is no doubt adaptation of the latest technological developments will enhance both technical and economic viability of the enterprises involved in urban agriculture. According to an article published in the Institute of Food Technologists Food Technology magazine, soil-less production systems, such as hydroponics and aeroponics, are 90% more efficient in water usage than irrigated fields in California or Arizona. Water and land requirement and fuel usage for shipping are significantly lower for the soil-less growth than those for conventional agriculture. Using ladybugs to control insects and LED lighting that emits wavelengths most conducive to plant growth eliminate pesticide use and speed up the plant growth.

Although urban agriculture provides tremendous opportunities for sustainable food production and local economic development, it has its own limitations, unfortunately. A balanced diet requires more than just lettuce and vegetables. Current urban agriculture systems are not suitable for producing grains and many fruits.

Still, I welcome and appreciate every initiative that reduces environmental impact of production, enhances resiliency of the food supply and promotes healthy eating habits in communities.